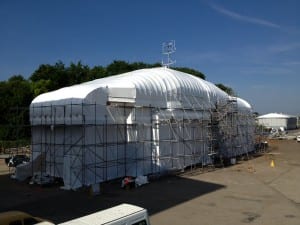 Tufcoat completed the scaffold containment of Piriou’s project to enable the completion of the 44 metre maritime training vessel. The French shipbuilder’s debut navy vessel will be operated by navOcéan. It was officially delivered in September 2013 and named “Almak”, meaning “desert lynx”. The Almak is the result of close collaboration between DCI and Piriou who created the company navOcéan in July 2012 to build an MTV.

The training ship is capable of holding 8 crew members and 18 passengers, including 16 trainees and instructors on the training missions. Admiral François Dupont, CEO of DCI, commented, “The construction of the Almak is an ambitious project that has mobilized teams from Piriou and DCI for 12 months. It is a feeling of satisfaction and accomplishment that exists within the team. ”

Tufcoat’s ability to create working environments through utilizing shrink wrap solutions proved to be the ideal complement for Pirous’ project. Our team erected a scaffold frame around the vessel and continued to fully encapsulate the structure, allowing sand blasting, among other tasks to be conducted. This solution enabled both internal and external protection from weather and prevented by-products from entering or leaving the site. Certain specifications to allow flexibility were demanded, such as a three metre spacing around the boat to allow for works access with a boom lift, which were conveniently met.

This sizeable project required 4,000 metres of our 12x50m flame retardant 190µm film and 108 rolls of patch tape. Despite the size of the task, it took just three weeks from the first pole of scaffolding being erected through to completion. This consisted of 6 of our team taking 2 weeks for the large scaffolding frame and the final week for wrapping of the object. Once completed, Pirou encountered a problem with birds landing on top of the structure, and came back to Tufcoat for a solution. Through our industry experience and years of knowledge we implemented a line system on the roof which had immediate effects in keeping the birds from landing on the projects ceiling.

The building of the Almak proved a great success for Piriou in moving forward and diversifying in to new challenges. Tufcoat are proud to have been involved with such a project and to offer our seamless solution to help them hit their targets in the most effective manner possible.
[flickr_set id=”72157638550488015″]