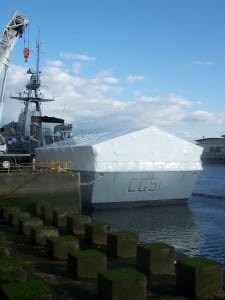 t provided a complete containment solution of the flight deck for the 2nd of 3 vessels for the Government of the Republic of Trinidad and Tobago (Later commissioned into the Brazilian Navy) on behalf of BAE Systems Scotstoun.

The flight deck encapsulation, prior to grit blasting and subsequent painting services to support the construction of the vessel, required 550m² of 300µm flame retardant shrink wrap to be installed by our 3 man team and took 3 days to complete.

The 3 90m Offshore Patrol Vessels were part of a £150 million contract to build, integrate, test and commission (up to sea trials) three ships for the Government of the Republic of Trinidad and Tobago (GORTT). However, the order was later cancelled and the vessels were finally commissioned into the Brazilian Navy as Amazonas, Apa and Araguari.