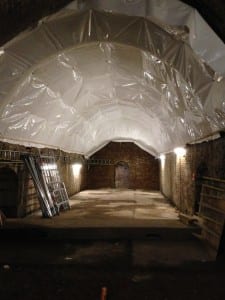 The London Bridge station redevelopment project is a £6 billion upgrade to introduce more frequent trains from Bedford to Brighton through the heart of London.

After initial contact from Grimshaw Architects, who are leading the design to develop London Bridge Station, it was established that the subterranean tunnels which house the gas, water and electrical services would be susceptible to water ingress due the structural works which were to take place above when replacing the slabs which support the track.

Tufcoat began product trials at the station in St Thomas Street in April 2013 after developing a new method of installing our shrink wrap sheeting which enabled the film to follow the archways of the 19th century structure.

This flameless solution enabled Costain to continue in St. Thomas Street to construct the new platforms 13, 14 and 15 by minimising the displacement of ground water whilst precast concrete sections and prefabricated steel canopies were installed.

The project has proved very successful, with Tufcoat teams having worked hard to minimise the disruption to the workforce and other services by working night shifts to keep to the agreed schedule.

Over 500 linear metres of tunnel have been protected with an estimated 3500m² of Tufcoat flame retardant wrap installed over the course of the project.

This project is another in Tufcoat’s portfolio of Network Rail connected projects, which boast the Reading Station Area Redevelopment as well as ongoing projects more typically involving grit blast containment and painting enclosures.