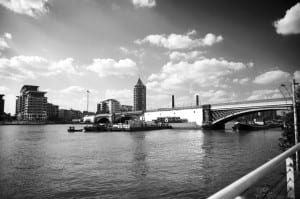 Tufcoat were contracted by Rainham Industrial services to provide the encapsulation of scaffold structures for the Battersea Rail Bridge, one of the oldest bridges in central London. It was declared a Grade II listed structure in 2008, meaning refurbishment work for its preservation is compulsory and to be carried out if it is deemed necessary.

A project began in 2013 that will extend the life of the bridge by at least 100 years. This will involve strengthening the bridge with additional steel and repairing ironwork. Other tasks are cleaning, priming and painting the metal works, which will require scaffold encapsulation.

Kier were the main contractor for the repair work. Thames Link Marine and Wood, Hall & Heward provided marine services so the various contractors had access to the bridge and could carry out their operations safely and efficiently.

Tufcoat provided the encapsulation of the scaffold structure around one of the bridge arches. This was a particularly difficult task due to having to access the bridge by water, meaning Tufcoat had to utilise the marine options available. The process of shrink wrapping the scaffolding structure involved first completing work on the sides and then the roof edge. After, patch tape was used to cover any gaps and provide a final seal to the structure. Tufcoat’s work was carried out over the course of 6 days.

Grit blasting will take place to remove the old paintwork, so a new layer of coating can be applied. The use of Tufcoat shrink wrap on this project means that substances such as chippings, paint and spray waste won’t escape and pollute the river Thames during blasting. Furthermore, the shrink wrap creates an internal environment that gives a controlled climate, allowing newly applied paint to dry quicker.

Tufcoat are proud to have contributed to a project with such heritage.