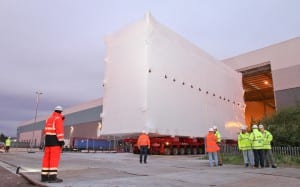 omething that really sets Tufcoat aside from the rest of the field is the ability to think outside the box when approaching projects.

This was demonstrated by the requirements of the Interserve project for Evaporator D at the Sellafield nuclear site.

Tufcoat were tasked with shrink wrapping the 11 modules that make up the Evaporator D module, and a project of this scale required extra provisions to ensure modular transport corrosion was avoided during transport.

Something vital was the need for further reinforcement of the modules. Under normal circumstances the shrink wrap is applied directly to the surface of what is being contained. However, the modules had gaps in between the structural framework, leaving the internal parts of the module vulnerable to damage from the elements.

Tufcoat devised an innovative approach by putting netting over the gaps on the sides of the modules and then applying the shrink wrap over them. Tufcoat ran several trials to ensure that this approach would be successful. This reinforcement prevented strong winds from causing the shrink wrap from being blown in to the gaps and potentially risk being damaged.

Full protection of the modules was paramount. Components of each module are made up of high grade steel, and part of the module’s journey from Ellesmere Port in Cheshire to the Sellafield nuclear site was across the sea. High grade steel can be corroded by exposure to chloride, which can be found in salt. If water from the sea was to breach the module as a result of damage to the shrink wrap, then the steel component of the module could be damaged in the long term.

Due to the nature of the project, any damage to the module during transit would not be able to be fixed after the evaporator was functional as the area would become radioactive. This shows how important it was to provide a service that could be relied upon.

For more information about this project, visit the Interserve module case study.

Comments are closed.
To find out more about our involvement in this project Get in Touch