Shrink wrap is different from other coverings because it creates a drum tight, moulded fit over the object it covers. Because it cannot flap or chafe, it is extremely durable. The shrinking process is initiated by blowing hot air over the surface of the shrink wrap until it has shrunk to the required tightness. Shrink wrap is commonly used for the packaging of foods and consumer goods which after being wrapped pass through a computer controlled hot air tunnel on a conveyor belt. However, when thick industrial and marine grade shrink wrap is used to package extremely large and awkward objects a shrink wrap tunnel is clearly impracticable. For these types of projects a hand held portable shrink wrap heat gun is used. The correct choice of shrink wrap heat gun, and it’s correct use is fundamental to the success of the finished job.

This article is intended only as a general guide to the use of a shrink wrap gun, including a comparison of different models that are available in Europe. Although shrink wrap heat guns are easy to use devices, in daily use by many thousands of companies you should always ensure that;  staff have been fully trained, that the manufacturers instructions for each model of heat gun are followed and that all risks have been assessed. In addition to the guidance issued by the individual manufacturers of shrink wrap guns there is further general advice on the correct and safe use of heat guns and the correct use and storage of propane gas. Reference to any brand of heat gun in this article should not be considered an endorsement of that particular brand by the author and you should always make your own checks to ensure that any shrink wrap heat tool purchased and used is ‘fit for purpose’. 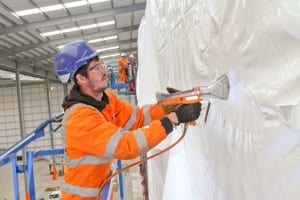 Most shrink wrap heat guns are powered by propane gas and work in a similar way. They are hand held devices with a handle/ trigger, and are connected via a 8-10m flexible rubber hose to a propane gas bottle. The propane gas bottle is normally moved around the work area on a gas cylinder trolley for safety. Where the operator has to move around the object it will make the shrink wrap job quicker and less tiring. When the trigger is partly depressed, gas is drawn along the barrel of the gun where it is mixed with air. As the trigger is fully depressed an electrode generates a spark which ignites the gas and air mixture in the burner to create a flame. The burner is normally protected by some kind of cowl to prevent accidental burns. The trigger acts as a safety device – when it is released, or if the gun was accidentally dropped, the flow of gas is cut off and the flame extinguished.

The heat gun can first appear quite a daunting piece of equipment to use. When the trigger is depressed, and the gas ignited, the flame is quite visible and burns with some ferocity which can be quite noisy, (almost like the noise of a burner in a hot air balloon). However, it is not the flame of the heat gun that is used to shrink the plastic covering but the hot air that the flame generates. Different guns will produce a slightly different pattern of hot air, but normally shrink a roughly oval area of around 30-40cm in diameter. The temperature required to shrink plastic films will differ between types of film and manufacturers but shrink wrap normally begins to shrink at around 100-140 Deg C. 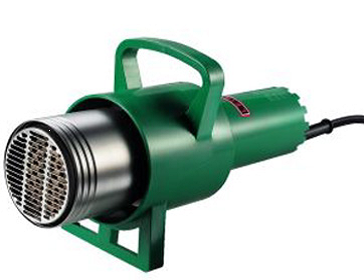 In some environments a gas powered shrink wrap heat gun may not be appropriate. Electric heat guns are commonly used for paint stripping or for shrinking the plastic insulation around cabling. However for shrink wrapping large objects, the use of these ‘domestic grade’ tools is clearly impracticable because of the low heat output and the tiny area of heat produced.

Larger ‘industrial grade’ electric shrink wrap are available but they are heavier, more expensive and cannot match the heat output of a gas gun. What this means is that the hot air must be directed at any point of the film for much longer which can lead to more heat being transferred through the shrink wrap to the object underneath.

Gas powered guns are by far the most popular choice. Using a propane gas powered heat gun to shrink plastic film or wrap is very much like spray painting with hot air. Rather than the heat being held in a single place on the shrink wrap it is kept constantly moving, normally from the bottom to the top of an object. This is so the ripples and creases are ‘chased out’ and so the shrink wrap is taught and tight. Because the gun is kept moving and not held in a single place for more than a couple of seconds, little heat is transferred through the wrap. The motto is ‘hit it hard and move on!’

The Shrinkfast range of shrink wrap guns are manufactured in the USA but are also available in Europe. The ‘998’ model weighs around 1Kg has a adjustable power output from 134,000 to 212,000 BTU. Like the Ripack gun, extensions are available up to around 6′. Again, this gun is supplied in a case, with a regulator and approximately 8m of hose.

The Tufcoat propane gas gun. Weighing only 1 Kg, this gun is of very simple construction having only 10 parts! Feedback from companies using this heat gun is that reliability is excellent. This gun has been made in the UK for many years and to a tried and tested design. Heat output is a more than adequate 100,000 BTU’s, and like most other shrink wrap heat guns it’s supplied with a regulator and 8m of hose. However, one of the main attractions of this gun is that it is significantly cheaper than the others .

Comments are closed.
For more information on our range of Shrink Wrap Heat Guns Click Here