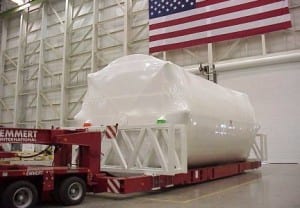 Yet another application for our 12 metre wide shrink wrap has been discovered!

This time it is to package bulk tanks to protect them during transport from the manufacturer to the end customer.

Many tanks are transported over significant distances by road and sea, and packaging is used to protect the finished surfaces from becoming damaged by road chips etc. The previous method tried was using large tarpaulins. These were fairly expensive, proved to be difficult to apply and tended to flap until they self destructed during transportation.

A fairly heavy grade shrink wrap film is recommended for this application – around 250 micron. By using an 8m or 12m width film, the tank can be completely encapsulated. The shrink film is wrapped around the tank and heat welded back on to itself using a hand held hot air gun to create a water tight seal.

When the tank arrives at it’s destination, the shrink wrap is removed by cutting around the perimeter with a safety knife, which will not scratch or damage the tank. The wrap is then bundled for collection by a local recycling company.

Comments are closed.
Need a quote for your own Industrial project? Contact us